Although I don't buy nonfiction for my system, I recently noticed a few titles from the "I'm a Great Little Kid" series from Second Story Press. 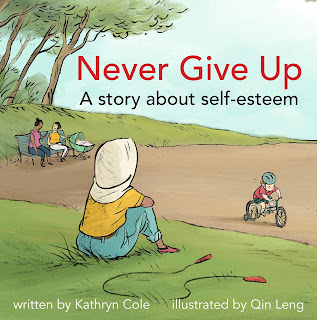 I've read Never Give Up: A Story About Self-Esteem and That Uh Oh Feeling: A Story About Touch, both by Kathryn Cole illustrated by Qin Leng. While I'm not reviewing them in a formal way here, I read through both of them and was favorably impressed with the way sensitive issues are handled, and the fact that the books are racially diverse in a way that doesn't resort to tokenism. I'm not sure having only read two of them, but I think it's the same group of kids in all the books, and each book features a different child as the main character. Never Give Up in particular could work with older kids in a storytime or classroom setting. I like that the main character is a hijabi girl who solves a bullying problem for someone else--a white boy who is being mocked for his inability to ride a bike.
Posted by Ms. Anna at 7:53 AM No comments:

Email ThisBlogThis!Share to TwitterShare to FacebookShare to Pinterest
Labels: nonfiction

August Round Up Two 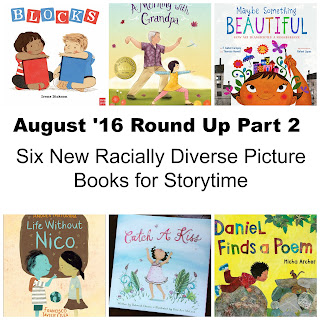 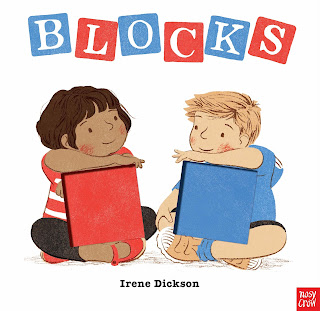 This one has all the ingredients for a perfect storytime book, especially for toddlers and younger storytimes. Ruby, dressed in red, builds with her red blocks. Along comes Benji with his blue blocks, and all is well until he takes one of Ruby's red blocks. A tug-of-war ensues, and the blocks become mixed up. The two companionably start building together and all is well. But what happens when Guy shows up with his green blocks? Readers are left to draw their own conclusions, but the endpapers full of green, blue, and red structures offer a clue. With large, clear illustrations and simple language and lots of opportunities to engage listeners this is an excellent choice for storytime.

Each spread has just a few words, but the characters show a lot of emotion and there's a lot to engage with on each page; here is a sample from four spreads:

Ruby wants her red block back. /

Maybe Something Beautiful: How Art Transformed a Neighborhood by F. Isabel Campoy and Theresa Howell, illustrated by Rafael López (2016) 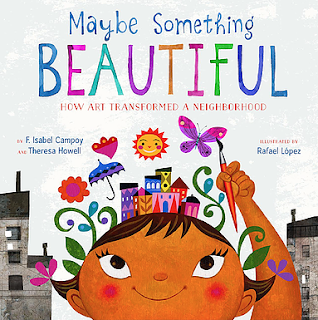 This one gets me in the feels. Talk about something beautiful! It's a fictional story based on the real transformation of the East Village in San Diego. A girl tries to bring color and beauty to her gray city by giving away paintings and drawings. Then one day she meets a muralist, and together they bring the whole community together to create something beautiful--a place and a community spirit. One of the things I love about this book is the way the act of creating art and bringing something to life with color are shown as a kinetic and powerful act. Readers can't help but see the beauty and feel the energy and joy this book brings.

Then, just like that he dipped a brush in the paint. BAM! POW! The shadows scurried away. Sky blue cut through the gloom. The man's laughter was like a rainbow spreading across the sky. 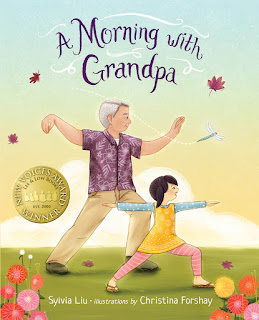 It seems rare to find an inter-generational book where everyone is portrayed with equal respect and agency, but this is one. Mei Mei finds her Gong Gong in the garden practicing Tai Chi. He shows her some of the forms, and although readers see that her interpretations aren't quite spot on, he assures her that she did well. When Mei Mei shows Gong Gong some of the Yoga poses she learned in school, it's his turn to struggle--but Mei Mei assures him that he's perfect too. Grandfather's patience, Mei Mei's boundless energy, and above all the love and respect for each other combined with Liu's lyrical descriptions rooted in nature and Forshay's vibrantly appealing illustrations make this a lovely morning indeed. This one is pretty wordy, but would be a good fit as a single story paired with a Yoga or movement event.

"How about we try the Mermaid?" Mei Mei asked. She sat with one leg bent behind her and the other leg folded in front. One hand rested on her bakc foot, and the other hand lifted to the sky.
Mei Mei was a creature of the deep sea guarding treasures.

"Are you sure it's not called the Pretzel?" asked Gong Gong. "That looks complicated."
"Try it," said Mei Mei.

Gong Gong twisted his leg this way and that, and almost fell over. He was a fish in the water trying to escape the dangling hook.
"I'm not made for the sea," said Gong Gong. 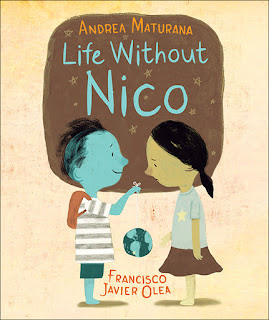 Separation is a hard topic for kids, whether it's being separated from parents or friends. In this story, Maia's best friend Nico is moves very far away for a while, leaving a hole in Maia's life. The symbolism used in the illustrations is elegant and powerful--Nico gives Maia a globe which throws a shadow over her heart, and in subsequent illustrations the shadows of other round objects represent the emptiness that Maia feels. But life goes on, and slowly the emptiness left by Nico's absence is filled. When it's time for Nico to return, Maia is worried that he won't have a place in her life anymore. But when they are reunited, Maia finds that Nico has a place in her heart, and nothing can change that. While this isn't a common topic for storytime, this book would work well in that setting if needed.

Sample text from three spreads during the 'sad' part of the story:

Now time passes slowly, and the emptiness follows Maia everywhere she goes. It's boring. She can't play with it, and it won't let other children near. /

Sometimes the days feel dark to Maia. Other times everything feels far away. /

But as time goes on, Maia meets an unexpected companion... [Maia finds a kitten]. 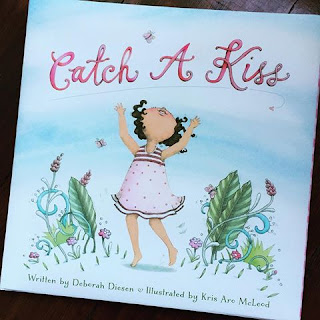 Izzie asks Mama to blow her kisses and she catches them--on her nose, in the crook of her elbow, or the tip of her ear. But then Izzie misses one of the triple-decker kisses, and although she tries her best to chase after it, she is devastated to lose it. Mama pulls her close and shares a secret: Mama-kisses always come back to find you. Izzie tells Mama a secret in return: So do mine, she says, launching a kiss into the sky. This one is sugary sweet, but has some emotional depth and a narrative conflict, so it could add some variety when paired with some of the more 'list' type picture books on the topic of motherly love.

Sample text:
"Another!" cried Izzie. Mama smooched again. She blew Izzie a zigzag kiss. It zipped back and forth. Zoom. Zip! Izzie caught the kiss in the crook of her elbow. She giggled at the tickly feel. 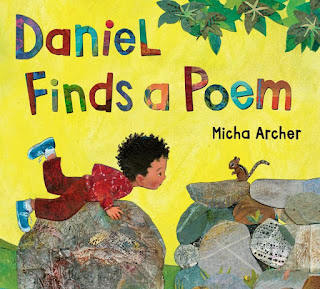 "Poetry in the Park; Sunday at 6 o'clock" reads the new sign up in Daniel's beloved park. Daniel doesn't know what poetry is, but throughout the week he converses with the animals, and each animal points some natural beauty that they see as poetry. By the time Sunday at 6' o'clock rolls around, Daniel has a poem of his own to share. This is a really beautiful book--from the concept, to the gorgeous collage artwork, to the poetry of the text itself. It's well-suited to storytime, and could easily be shortened for younger groups by omitting a few of the animal interactions.

Sample text from two spreads near the end:
That night, moonlight fills Daniel's room. He hears a who. Leaning from his window, he calls to Owl, "Owl, what is poetry?"

"Oh, poetry! Poetry is bright stars in the branches, moonlight on the grass, and silent wings to take me wherever I go. Good night, dear Daniel," she whispers, and flies off into the night.