November '16 Round Up: Six New Racially Diverse Books for Storytime 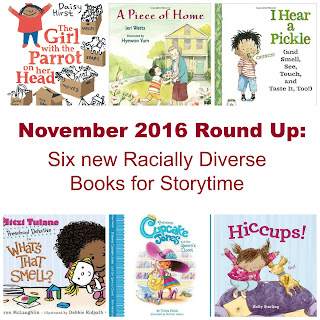 All titles are listed at the end of this post—enjoy! 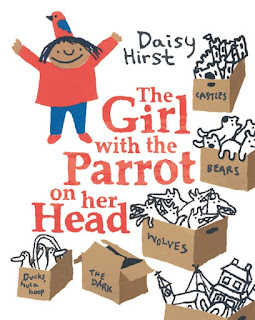 Isabel, the girl with a parrot on her head, has a best friend who moves away. She rages and pouts, and decides to rely on herself—she doesn’t need friends. She and the parrot come up with a SYSTEM to organize things in cardboard boxes, but there’s a wolf too big to fit. One day she finds a large box, perfect for the wolf, but there’s already someone inside. Chester helps Isabel solve her wolf problem, and the two become friends. Quirky, but would work in storytime.

Sample text on two spreads:
....So when she found the biggest box she’d ever seen, the girl with the parrot onher head called out, “Aha! This box is perfect for the wolf.”
However, SOMETHING was already inside. “Oh,”said Isabel. “Is this your box?” 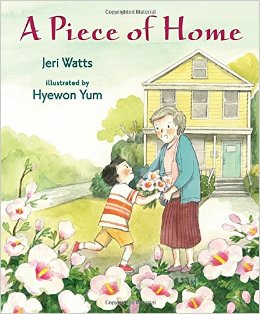 I can never get enough of Hyewon Yum’s expressive, endearing illustrations—they just burst with humor and warmth, and this book is no exception. Watt’s story of a family’s journey to emigrate from Korea is tender and satisfying. Even readers who haven’t experienced living in a different country will be able to relate to the universal feelings of loneliness, longing, and isolation—as well as the joy, pride, and camaraderie evinced through this story.  With longer text and a more in-depth story, this might not work for every storytime, but is one you shouldn’t miss.

Sample text:
Days become weeks, and weeks become months. I learn “Bathroom” and “Please.” I am surprised that I can form words that make their meaning clear, though they still feel like stones, heavy in my mouth. 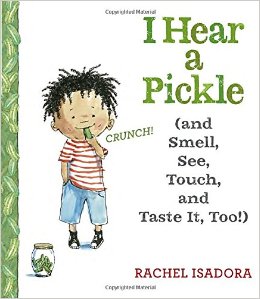 This is a longer book, separated into five sections—one for each of the senses. For each sense, there are three spreads with multiple examples. The examples include scenarios where you don’t experience the sense being highlighted—such as pointing out things that are too quiet to hear, or how you don’t smell anything with a stuffy nose. While there’s no story, the examples are thoughtfully chosen to evoke emotional connections. While the illustrations include children of a variety of races, the cover features a dark-skinned child with very curly hair. I would use this one in a shortened way, looking at one spread for each sense, or just focusing a whole storytime on one sense and including this title in my selection.

Sample text from one spread, spot illustrations accompany each example, but the overall trim size is large:

I hear the rain.
[boom] I hear thunder.
I don’t hear the snow falling.
[Whack! Hooray! Yay!] I hear my hit. I hear cheering! 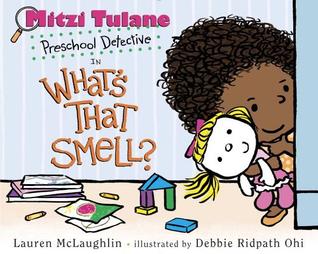 Mitzi is a dark skinned preschooler with curly brown hair. She and her white doll try to solve the mystery of the strange smell emanating from the kitchen. She spies on mama in the kitchen, discusses her findings with Baby Kevin, and discovers more clues. She cracks the case at the last second, and realizes that it’s her own birthday that everyone is gathered to celebrate, and the smell was her cake. Mitzi is clearly adopted into her all-white family, but the party scene shows a diverse cast of friends and family.

Sample text from two spreads:
“Baby Kev,” she said, “Mommy’s up to something and it sure smells funny”
Baby Kev had suspected as much.
“It’s not breakfast or lunch,” said Mitzi. “And dinner’s a long way off. So what do you think is going on in that kitchen?”
Baby Kev didn’t say much, but he had a lot of time to think.

So Mitzi left him to mull the facts of the case white she want out to search for more clues. 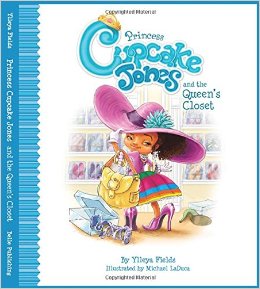 Princess Cupcake Jones and the Queen’s Closet is one of a series of books starring the title character. Cupcake, a girl whose fashion flair rivals Fancy Nancy, starts pulling out all the shoe boxes in her mother’s closet, trying them on and imagining stories for each shoe until she’s barricaded into the closet and must call for help. This one is a little longer, with rhyming text that mostly scans well, but Cupcake’s extravagant style and the Queen’s myriad lovely shoes will cause readers to happily overlook any slight flaws.

Sample text from one page; typically six lines per spread.
The Queen’s closet was Cupcake’s favorite place,
Stacked high with shoes within each case.
Those shoes were amazing—the stories they told!—
A rainbow of colors from purple to gold. 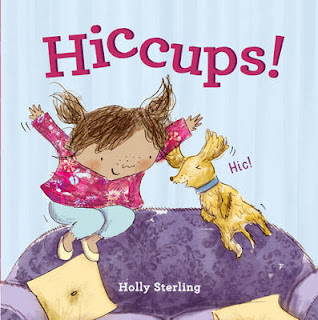 Who doesn’t love a good hiccup book in storytime? In this simple and sweet story, Ruby and her dog, Oscar, are playing a game when Oscar starts hiccupping. Ruby proposes several cures to no avail, but while they don’t cure Oscar’s hiccups, they provide the perfect opportunity for interaction in storytime—from jumpity jumping to waving a magic wand, little ones will stay engaged with this story that is the perfect blend of predictable and surprising.

Sample text--all the pages have about the same amount of text, here’s one spread:

“I know, why don’t we try dancy—dancing like this?” said Ruby. [hic!]
Oscar danced just like Ruby, but the hiccups did not stop.

“How about if we jumpity—jump like this?” said Ruby.
Oscar jumped just like Ruby, but the hiccups were still there. [hic!]